About 20km south of Brodowin is the Dannenberger farm, a farm with a very family orientation; the farm as a holistic organism of the village is their goal. The “Produktivgesellschaft Dannenberg”, managed by the Petermann family, cultivates agricultural land of 650 ha.

A special feature of the region is its geological diversity in a relatively small area. The Gamengrund, a long glacial valley formed by the Ice Age, meanders through the areas. To the south of it follows a terminal moraine, which gives the visitor the feeling of being out of nowhere in the mountains. Together with gentle river meadows and isolated arable land, there is a diversity that gives this region a special character and impresses both residents and visitors again and again.

In July 2017, the Dannenberger dared to take an important step in a new direction. Since then, they have been operating according to the guidelines of biodynamic agriculture (Demeter). This decision was the basis for our cooperation today!

Their long-term goals in organic farming can be summarized as follows:

Every single point is a basis for sustainable and future-oriented agriculture, which can also supply future generations with food without polluting the environment.

The Petermann family also strives for high standards in dairy farming. Free-standing cubicles with straw litter and daily runs are in use all year round. Grazing on adjacent grassland areas is also essential (in spring and summer or during the growing season). 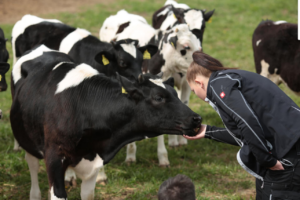 The cows are milked twice a day in a tandem milking parlor with rest periods of 12 hours each.With 140 dairy cows and their own offspring, the Dannenbergers produce around 1 million liters of milk per year, with which they reliably supply our dairy, among other things.

As with us, the resulting manure plays a decisive role in your cultivation concept and in increasing the soil fertility on the arable land. Since 2016, Holstein Frisian dairy cows have also been paired with beef breeds in Dannenberg. Female and male animals live outdoors all year round for about 2 years. In winter, a tent roof serves as winter quarters and protects the cattle from the weather and extreme cold. With a weight of 600-800kg, they are ready for slaughter after about 1.5-2 years. A beef cattle is only slaughtered when it can be ensured that almost all of the beef’s meat can be sold. That is why your customers always order in advance!If something is left over, the meat goes on sale. In this way they want to make sure that they do not produce any waste from this valuable food. 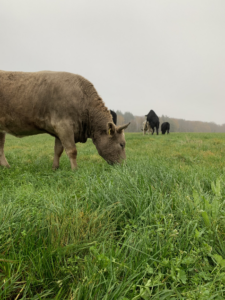 In 2012, the construction of a milk filling station in the service center “Der Dannenberger” began. Renovation and expansion work was carried out on an existing garage for a sales room for raw milk. Since then, customers have been able to “tap” their fresh milk into existing glass bottles or containers they have brought with them on a daily basis.

In addition, the Dannenbergers offer interested people from the non-agricultural sector a comprehensive insight into agricultural production and want to work with you on a new awareness of raw materials for human and animal nutrition. The aim of their public relations work is the way towards regional self-sufficiency against the background of traceability and mutual trust. Within the scope of their economic possibilities, they support voluntary projects, children’s facilities and care for the elderly within their community.

We are extremely grateful for such a reliable and experienced partner in the immediate vicinity, who also shares so many of our goals and actively promotes them. As one of five suppliers to our dairy, the Dannenbergers complement the production in our dairy and sometimes our sausage and salami production via meat deliveries.

They are also represented on social media channels. The daughter of the owner, Skadi Petermann, works hard on the farm and at the same time runs a blog and a profile on social channels in which she writes wonderful reports about her challenges, successes and joys in everyday life on the farm. If you want to take part in real country life, this is the place for you!